Oil and gold leaf on linen

Oil and gold leaf on linen

Blank Space is pleased to present Sequence, a duo exhibition featuring the artists Levent Tuncer & Randall Stoltzfus. Both artists’ paintings feature concepts of repetition; as each’s pattern continues, the sequence of creating by simultaneously repeating and evolving is both engaging and alluring.

Through his method of overlaying a single tile pattern, Tuncer’s paintings slowly unfold their three-dimensional ridges, spreading a sequence of changing shadows. His paintings deal with ideas of repetition, order and disorder, history and fiction, change, and a primal awareness of the duality that is inherent in all cultures. Stoltzfus’ primary use of circular patterns excites and engages the eye, subtly changing as both the light and the perspective of the viewer moves. His paintings create an opportunity to slow down a bit, which can lead to seeing something unexpected. Both artists use repetition to create something new within each work and sequentially throughout the works presented in this exhibition.

In Tuncer’s History/Fiction series, the artist has been working with a single sixteenth-century Iznik tile pattern. By repeating the design, allowing it to echo itself and mutate, and by superimposing various geometric systems on it, he creates a complex visual equivalent of the dynamics of cultural disjuncture. Just as memory alters the perception of time, by overlaying these patterns Tuncer subverts their repetitive rigidity. In painterly language, using tactile qualities and color, he suggests that order, like authority, is vital only when it evolves, and that it evolves only when challenged and made to diverge from its historical context.

The circular marks in Stoltzfus’ paintings are patterns that allow images to emerge and then disappear. This patterning resonates because it mirrors the physical structures of the eye in several ways. To expand these simple circular brushstrokes, he paints highlights and shadows around some of the circles. This creates a tromp l'oeil texture that can be touched only with the eye. Stoltzfus spikes some of his paint with raw pigment, while adding small amounts of gold leaf further develops its texture. Although the paintings are colored by the grit and glitz that surround him in Brooklyn, they remain ghosted by the rural Virginia landscape he knew as a child.

Levent Tuncer was educated in the UK and received his MFA from University of Hartford. Tuncer has shown at exhibitions extensively throughout New York City as well as internationally in London (UK), Bogota (Colombia), South Sabhan (Kuwait), Amsterdam (Netherlands), and Dublin (Ireland). His most recent major commission was a collection of 22 paintings for The University Church in Dublin, Ireland, depicting events in the lives of Peter and Paul and the 12 individual Apostles. Some of Tuncer’s most recent exhibitions have been at the Painting Center (New York), DM Contemporary (New York), and other galleries in Manhattan and Brooklyn.

Randall Stoltzfus has shown at exhibitions from Virginia to New York City and as far away as Pyeongtaek, South Korea. He studied at American University in Washington, DC and has since received a number of fellowships and artist in residence awards.  He was Artist in Residence in Perugia, Italy, where his work is in the public collection at the Centro Pari Opportunitá. Two of his paintings were selected for the art bank program at the DC Council of the Arts & Humanities in Washington, DC. Some of Stoltzfus’ most recent exhibitions were at the Union Theological Seminary, Great Pop-Up Art Sale and LIMN Gallery respectively in Manhattan, Brooklyn and San Francisco. 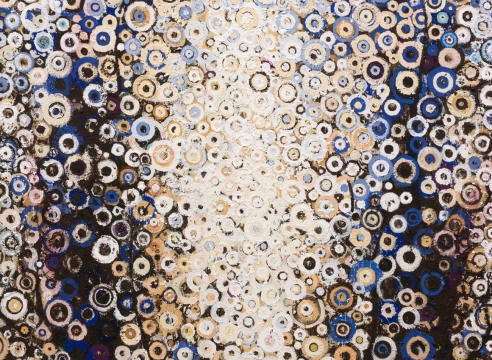