BLANK SPACE is pleased to present “Atlas” the first solo exhibition of paintings by Matthew Langley in New York. “Atlas” explores the overlapping of mapping and information, place and process. Using a minimal color field on a grid, and multiple layers of oil on canvas these artworks explore the process leading to the final form of the image.

When confronted with the term “Atlas,” mapping is the clear standard; however, the artist also thinks of timelines and choices. Traditionally we know an atlas to be a book or portfolio of maps. In the modern era, atlases have become a source for detailed information about a particular subject or place – this expansion of information is what has interested Langley during the creation of the series of artworks. Each work is a representative piece of the larger Atlas or “catalog.” Moreover, viewing the series among the artist’s other works functions as a progressive signpost, according to Langley, each work is a “marker of a longer journey - a signpost pointing to changes and decisions in the image making process.”

In this way, the “Atlas” series is the portfolio of his process that is questioned, documented, changed and eventually realized that the intellectual and physical processes are never finished. Initially, Langley paints part of the surface and then uses a tool, such as a concrete scraper, to scrape or burnish the top layer of paint. This reveals the layers underneath as well as mixes some of the layers. When there is enough of a reveal underneath, he allows it to become the final layer of the work. Recently, Langley has been working with leaving both thicker and thinner layers, giving fuller and denser areas of color, as well as allowing the viewer to see more of the under-paint (or process) to show through.

Langley’s painting titles are both poetic and inviting. The viewer participates in understanding and uncovering the painting through an introduction by title and closely investigating the colors, layers, and grid. “The Day the Rain Came Down” is concise introduction to the multicolored top grids with a horizontal, darker green the bottom of the canvas. The title gives it a backstory that is apropos of the composition. For example with “Slightly Like Strangers”, the under coat is a vivid orange-yellow color with very neutral Battleship Gray placed on top, which through the process of the work transforms into a dark-gray-green that anchors the bottom of the image.

After graduating with a BFA from Corcoran School of Art (Washington, DC), Langley has been featured in a number of group and solo exhibitions over the past two decades. He’s also been featured and interviewed in a large number of publications, blogs and broadcast media – most recently in Art in America, Elan Magazine and on NPR. His work is included in various collections including: Ernst and Young, MacAndrews & Forbes, and the DC Commission for the Art and Humanities among many others. 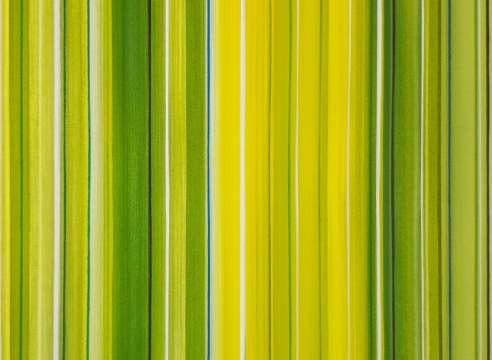