Liquid Light - (A Portrait of Gabo)

BLANK SPACE is pleased to present a solo exhibition titled “Beyond the Veil” featuring the selected works of Farsad Labbauf. Labbauf uses his many sources of inspiration to create layered meanings that come together in a persuasive and challenging collection of paintings and drawings. Beyond the veil is a meditation on what lies beneath the form; a world where subject and object merge into one.

Created over the past five years, these works continue to explore the interplay of connections among an array of subjects. “Tulips Teeth” are a series of pencil drawings that layer flowers, false teeth and a male deer, superimposed on a self-portrait to examine connections among such themes as nature, beauty and the inevitability of decay.

Labbauf explains: “‘The Golden Rule’ layers two portraits of my favorite contemporary figures on the same canvas: Tenzin Gyatso, the fourteenth Dalai Lama, and Gabriel Garcia Marquez, the celebrated Colombian author. These two icons are overlapped on the same canvas to form a connection between such polarities as passion and reason. The canvas is further layered with two playful squirrels, an animal also known for its efficiency in gathering food. An existence bridging the gap between such measures as passion and reason.”

As in most of his Beyond the Veil works, color is treated in its truest form as beams of light and not as the illusory world perceived by the eye. It is through the connection of these beams that images are formed and a world perceived. While the anatomical studies, such as in “Study of the Ear - #1”, examine the more subtle and momentary connections in the passage of time,  works such as “Mossadegh” and “Pause” explore the connection between presence and absence.

“Mossadegh” is a light rendering of the celebrated and extremely notable prime minister of Iran (1882-1967) whose tireless efforts, among many other achievements, lead to the nationalization of the Iranian Oil Industry. “Mossadegh” pays homage to the omnipresence of this prominent figure and his legacy in the cultural psyche and foundation of today’s Iran, long after his death. Similarly, “Tenzin Gyatso” symbolizes a lifetime struggle with the Chinese government. His portrait is marked by his response to these hardships with a white Peony, a traditional floral emblem of China symbolizing honor and riches.

Educated at Rhode Island School of Design, Farsad Labbauf has been featured in group and solo exhibitions for over 20 years, most recently in Iran, the US and the Netherlands. Collections showcasing his work include: Saatchi Gallery (London, UK), Salsali Private Museum (Dubai, UAE), Museum of Contemporary Art (Esfahan, Iran), Walt Disney Corporation (Orlando, US) and Carstens de Boer Art Collection (Amsterdam, Netherlands). 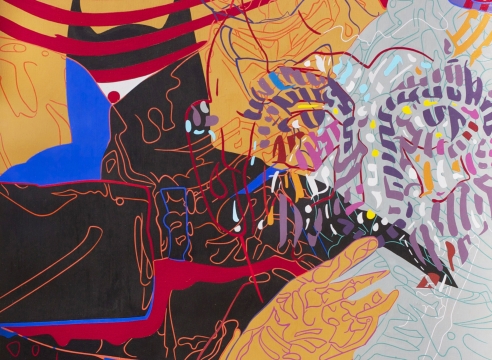